We start by laying out what "possession" really is, so that players can learn to read the game better, in smarter ways to achieve this aim. Because, Possession is a way of playing out of pressure into a position of less pressure, and that takes a thinker. We do this surgically. Not with a machete, but a scalpel–because Possession is not one thing, it's actually multiple things.

The 5 Pillars of Possession 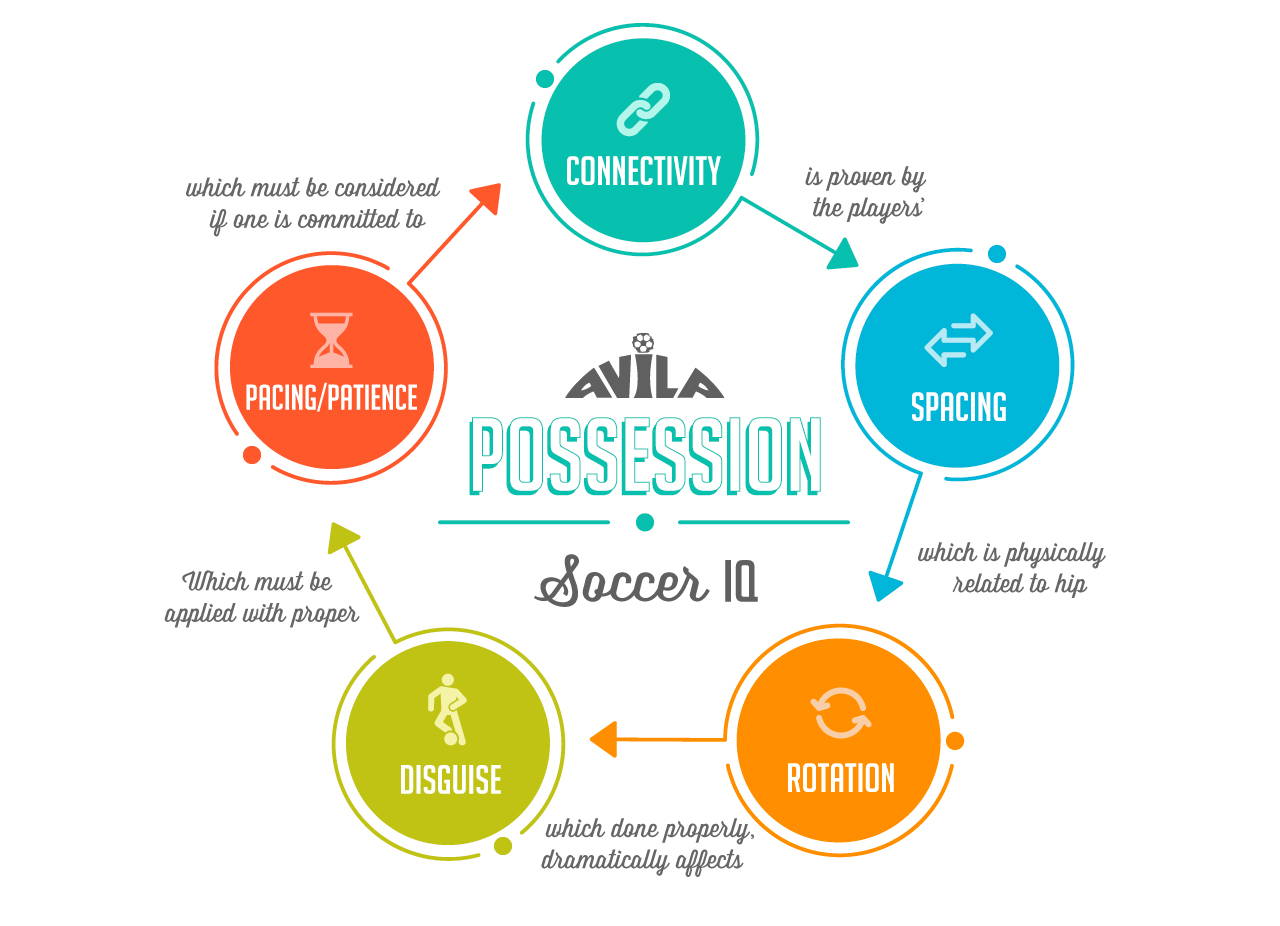 Eryck explains a concept he refers to as Connectivity which is a key component of Soccer IQ (Possession)
The inspiration in watching a Possession style (Soccer IQ) of play, is the sense that the players are connected on some deeper level and as result the performance is flowing and smooth. So we need this word because it’s not enough to be Aware – you have to seek out a connection with your teammates, just like water seeks it own level, and fluidity is the result.

Like droplets of water that inherently want to band together at the molecular level, Connectivity is a deeper desire to compete as a unit rather than an individual knowing that ecosystems outlast organisms.

A player with this quality does not need to be facing the teammate they plan on passing to; they can bridge that person in and then adjust their spacing and the rotation of their hips to offer them a back pass option. As a coach, if you have to resort to coercion you will never have cohesion. Players must be be committed to the “continuous connection”.

For the development of brilliant soccer players 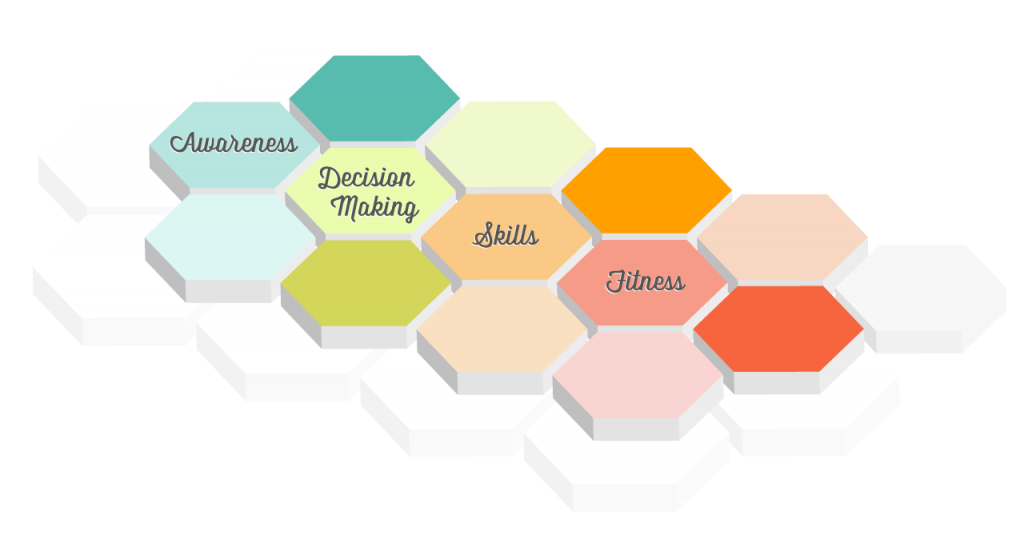 A paradigm shift away from conventional youth soccer principles has been needed for a long time because the core fundamental challenge of playing great soccer is not the mastery of skill or physical fitness, but the awareness and adjustment of ones spacing.

Scrimmage is the key. A player cannot learn the art of spacing if they don't play soccer often enough. Because it's frequency, which allows them to become "aware" of what's around them. You can not adjust your spacing if you're unaware of how much space there is. 4v4 small-sided scrimmages is a mechanism needed to encourage players to apply their own solutions.

Today, young players are only ever exposed to scrimmaging for a limited time at their weekly, formal adult-controlled soccer practices where coaches feel they should focus on just skill and fitness, or pre-designed tactics where thinking is prohibited and following instructions is the new sport ethic. Today, youth coaches specialize in training kids to execute, not to think. And there are consequences.

"It turns out that many children are like a toolbox, they have the skills and physical tools to do the job, but they just don't know how to build a goal." -Coach Eryck Avila

That's why the order of things matters. In countries that are the serial winners of the World Cup, young kids get to scrimmage a lot, and often just in the streets, but that is the perfect space, the perfect frontier. Their skill development skyrockets, but not before their tactical awareness does first–order matters. Free from adult intervention, children first play soccer, and then begin to seek out solutions in the form of skills as the game keeps presenting options to the child over and over. That's the way it's done in nature so that's how we should be doing it at the club training level, in this order:

It's not hard to help players improve their skills or physical fitness; what's really hard to teach is Soccer IQ. Skills itself is not hard, application of skill is hard.

Soccer IQ is best developed in 4v4 small-sided scrimmages, where kids learn to think. Thinking is hard to quantify and is intangible just as the game itself is fluid, especially compared to other sports which could be characterized by excessive time-outs, whistles, stoppages of play, huddles and even playbooks written by special teams coaches.

Soccer is improvisational. It requires constant adjustment. A child's brain needs to be like a NASA super computer, calculating multiple random factors instantly. And so the core thought that all great players need to develop, centers around how to adjust their spacing to exploit time and space, not just for themselves but for their teammates. It's only then that physical skills and physical fitness are meant to enhance the child's awareness and decision making.

Today, parents and coaches want to skip the intangible for concrete things they can see and measure such as improved skills or fitness, but they are skipping the "natural" order of things–they are skipping the core challenge–Spacing is that final frontier and scrimmaging is your spaceship, it's the mechanism to get your kids to the next level of performance. If we are to dominate at the international level, the Avila Paradigm is the start. Scrimmaging is key. We already have the greatest athletes in the world and they do possess world class soccer skills, the problem is we have outgrown the coaching and need a new model that trusts in the natural genius of our youth.

Our 4v4 scrimmage spawns from a Dutch philosophy that has more recently germinated itself in Spanish soccer, seeding continuous success for one of the greatest clubs in the world, FC Barcelona. In 1985, the Royal Dutch Football Federation (KNVB) began formal research into the development of creative players, and found that creativity was nurtured by the game itself—as kids were free to try their own solutions to problems presented.

This realization led them to introduce 4v4 scrimmaging. This new format, they believed, was the smallest way of playing the game without losing the essentials of soccer. There are always possibilities to play deep, wide or backwards, and players are constantly confronted with true match situations.

Our 4v4 Scrimmaging program builds on these proven foundational concepts by using an indoor field—its four walls and perfect playing surface force quicker reactions and foster creativity. And by injecting an Avila trainer into each match, quality of play is preserved. What results is an opportunity to develop amid competition, something typical leagues aren’t able to offer.

Be part of our revolution by joining our new breed of soccer league, 4v4 Scrimmaging at Avila.

Reverse Process Rhythm (RPR) is the trademark of Avila Creative Soccer. It is a type of drill specifically used as the warm-up to the Scrimmage Class because it is a tactical awareness methodology pioneered by Coach Eryck when he was doing his Masters in Sports Coaching. An RPR Drill is special because each one encompasses all of 5 Avila Pillars of Possession. A Possession style of play is what’s expected in an Avila Scrimmage, and is a type genius that merits training and is a missing link for many players who often have skill but don’t seem to gel with the “unit” well. Check out the RPR video below.

What makes this video exquisite is the way the players continually recalibrate the space between them, and the mental endurance required to keep the rhythm.

“Spacing, the final frontier” as coach Avila likes to say, is the hardest single challenge of playing well and so the one he chose to address through the use of RPR before every Avila Scrimmage. A magnificent method of warming up was needed to match a magnificent scrimmaging concept.

Thanks to RPR, every aspect of the Avila Scrimmage, including the warm-up, is now designed to accentuate our paradigm and get participants operating as leaders, as visionary players who can express their imaginations on the field. We hope you enjoy our Scrimmage program, which we sincerely hope will to give your player the fuel they need to realize their goals.