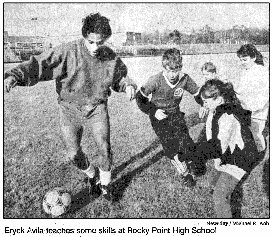 The 21-year-old student, who grew up in Islip but now lives in Rocky Point, is so serious that he gets up at 4 a.m. to drive to 6:30 a.m. practice in Brooklyn. And that’s all before driving to pre-law classes at 10 a.m. at the State University at Stony Brook, where he’s a junior and the team’s leading scorer.

Now he’s to fly to the Caribbean Tuesday, where he’ll use his spring recess to play for Puerto Rico, the land of his forefathers, which has never yet qualified to play in the World Cup.

Avila’s trip to soccer fantasyland started when Arnie Ramirez, the Costa Rican-born coach at Long Island University’s Brooklyn campus, was asked by the Puerto Rican government to recruit players from the New York area to make up a team to train for the 1994 world competition.

Ramirez, who was familiar with Avila’s play at Stony Brook, invited him to try out. Four weeks ago he was accepted as a midfielder—and one of the youngest members on the Puerto Rican team. Avila is one of three Long Islanders on the team; the others are Milton Espinoza of Franklin Square, a Fordham University graduate, and Phil Padilla of Brentwood, an Adelphi University graduate. “Eryck is skillful and controlled; he’s going to help us a lot,” Ramirez said.

Now Avila’s main problem is to juggle his studies with his boyhood dream of being a soccer star. But he’s not new to juggling fact and fantasy. After high school he played a European tour with a young team called the American Ambassadors, during which he had been offered a contract with a Dutch team, “which I turned down to go to college.”

Then a year ago, after two years at Fordham University, he took a year off to try out for various soccer clubs in England. He got a two-week tryout with the Liverpool team, one of England’s best. He wasn’t picked up in Liverpool, but did have a four-month stint with a second-division Liverpool team, the Tranmere Rovers. “Even this was almost unheard of for an American and great experience,” he said.

After that, Avila decided to return and continue pre-law studies at Stony Brook, where he had lived on campus as a boy while his mother, Sylvia Smith, and step-father, Peter Smith, were postgraduate students in social work.

“Eryck got his first real training in Brentwood at the age of 7, with a wonderful coach there, Ernest Boedner, who still teaches kids and got things started for Eryck,” recalled his mother, who hails from Aguas Buenas in Puerto Rico, where her family still lives.

Her son’s bedroom—the walls full of medals, trophies and soccer memorabilia—illustrates his longtime dream and his fan worship of Brazil’s soccer stare, Pele. “Eryck was the youngest player in Rocky Point High School, when as a ninth grader he got on the varsity team and it won the state championship,” his mother added.

Avila’s new mentor, Ramirez, noted that any U.S. citizen can play for Puerto Rico, because of its U.S. commonwealth status. But he added that almost the whole team is Hispanic and mostly of Puerto Rican ancestry, with 12 players coming from New York State.

The schedule ahead calls for Avila to head south for a practice game March 15 with either Venezuela or Costa Rica. From there, he’ll travel to the Olympic Village of Salinas in Puerto Rico for intensive training and practice games against regional teams through March. The serious stuff starts with “away” and “home” matches, March 22 and 30, against the Dominican Republic, in the opening elimination games for the 1994 World Cup.

“We’re hoping to make history by beating them,” Avila said. “They’re archrivals of Puerto Rico and the game is already sold out.”

The slim, serious Avila, who relaxes to Chopin and Schubert and enjoys political debate, did an internship in the Suffolk County executive’s office two summers ago and for the past three years has been a speaker at Suffolk County’s annual Hispanic Youth Conference. He also volunteers his coaching skills to help young soccer players. “I feel a commitment to the kids—to give back a little of what I got,” he said.

How will he manage the interruption to his studies? Avila, who has a 3.0 grade point average, says he’s lucky that the training comes in spring recess. He’ll only need to catch up on a week of classes, he said, with other training and games scheduled for summer and for as long as his team stays in World Cup competition.

An avid 10-mile runner, Avila also embraces healthy eating (“including alfalfa sprouts,” he said) and the Greek ideal of a healthy mind in a healthy body.

“He does aerobics with me at my Sunday aerobics class—the only fellow in the class and it doesn’t faze him a bit,” his mother said. “He feels aerobics are a good way to limber up and put in time with his mom.”